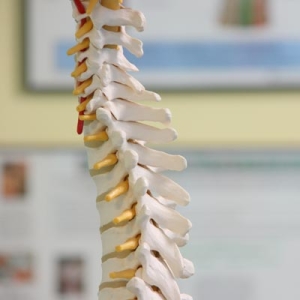 Spinal cord stimulation (SCS) was first introduced to treat chronic pain in the 1960s. Routine use of SCS began in the 1980s and this non-medication treatment has revolutionized treatment for many chronic pain patients. Historically, patients that had chronic pain, failed back surgeries, peripheral neuropathy and CRPS (complex regional pain syndrome) were not given many options. Many had to manage pain with pain medications which offered many unwanted adverse side effects and limited long term effectiveness. With advances in SCS, treatment is increasingly being used to avoid futile back surgeries. See more about use of SCS therapy for chronic pain.

There have been many advances in technology over the years including rechargeable batteries, position sensors, MRI compatible devices and paresthesia-free stimulation.  The Senza® High Frequency device (HF10) was introduced internationally in 2010 and obtained US FDA approval in 2015. Traditional low frequency SCS would deliver electrical impulses at a rate of 40-60 Hz. This would produce a paresthesia (tingling) sensation in the extremities. Often times this is a more pleasant sensation than the original neuropathic pain (burning, stabbing, tingling). The HF10 device can safely deliver electrical impulses up to 10,000 Hz. This means the patient can get relief of both back and leg pain without the paresthesia sensation. Some patients that also failed to respond to low frequency stimulation or were unable to tolerate the paresthesias have been able to find relief with the new higher frequency technology.

Nevro’s newest device, Omnia®, was FDA approved in 2019 and continues to offer the HF10 therapy in addition to every other possible waveform already on the market simultaneously, giving patients more versatility in their programming options. Most devices have now been FDA approved for conditional full-body MRI after implantation. The HF10 battery life is also guaranteed for about 10 years (longer than most other brands) and is rechargeable, which means it needs to be charged on a daily basis. Since its paresthesia free, the HF10 therapy may be used while driving and sleeping, without having to turn the device off or change the settings frequently.

Implantation of both traditional and HF SCS devices are very similar, but also with one key difference. The lead wires are implanted through an injection through the skin. During the trial phase, the wires will be connected to the power source (IPG) outside your body and taped to the skin. The trial phase with HF10 devices should last about one week. During permanent implantation, the lead wires will be tunneled under the skin and the IPG implanted in the gluteal (buttock/waist) region.

A head-to-head study was done comparing traditional low-frequency SCS to high frequency (HF10) therapy. This study showed 44% of patients with back pain and 56% of leg pain patients with traditional SCS reported at least 50% overall reduction in pain. Over 80% of back and leg pain patients with the HF10 therapy reported 50% or greater pain relief. HF SCS studies also showed sustained relief without adverse side effect at 12 and 24 months. These patients also were able to significantly reduce use of opioid medications and had overall improved sleep. Some studies have also shown benefit in patients that have previously failed a low-frequency SCS system. The Senza® HF10 system also had a low (~3%) explantation rate compared to traditional SCS systems. Other SCS systems remain available with technical variations from HF10 which may make them a reasonable alternative option.

We are committed to improving your life without a knife.